In the Triggers configuration tab, you can find settings that let you define where, and how, your recipe can be triggered.

This section lets you configure where the recipe will be visible in your Jira instance as well as other options. 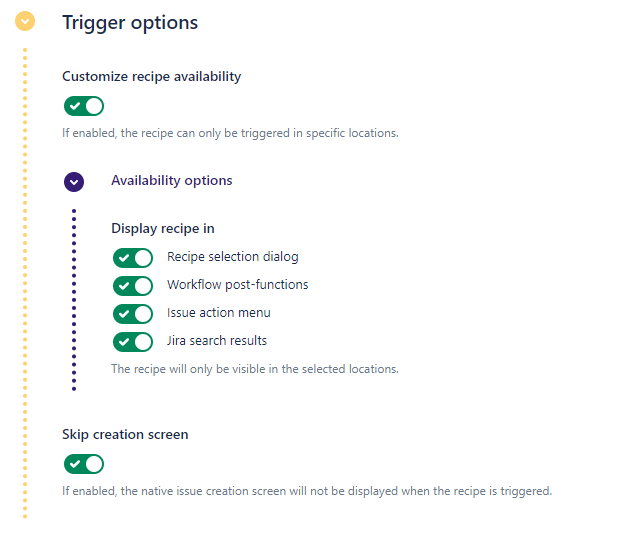 Use this option to define precisely where a recipe will be visible on your instance.
By default, recipes can be activated manually through the action menu of an issue, or added as a post-function in a workflow transition. If this option is enabled, the "Availability options" can be set to change this default behavior to a custom one.

This section lets you configure who can trigger your recipe.

Use this option to let anonymous Jira Service Management customers to trigger the recipe.

By default, recipes in workflow post-functions cannot be triggered by anonymous users. This can be troublesome in some use cases when tickets are escalated to another project as soon as they are created in the JSM portal. This option will let all users trigger the recipe through a post-function, even if they are anonymous.

Limit which users can trigger the recipe

Use this option to define which users will be able to see the recipe in the recipe selection dialog of a Jira issue, and able to trigger the recipe with a post-function.

By default, all users are able to trigger a recipe. When this option is enabled, some additional conditions can be added on the user's identity and group.

Here you can select more precisely which users can see the recipe in an issue or trigger it in a post-function.

Here you can restrict the recipe to the Assignee or Reporter of the source issue.

If both "Issue assignee" and "Issue reporter" are selected here, it means that both will be able to see the recipe.

Here you can restrict the recipe to users belonging to one or more user groups in the Jira instance. For example, only to "site-admins" or "jira-servicemanagement" users.

If several groups are selected here, it means that users from at least one of these groups will be able to see the recipe.

The "User identity" and "User group" options can be used concurrently. In this case, a user must satisfy both options in order to be able to see the recipe. This can be useful if, for example, you want the Reporter to trigger the recipe only if they belong to the JSM agent group.